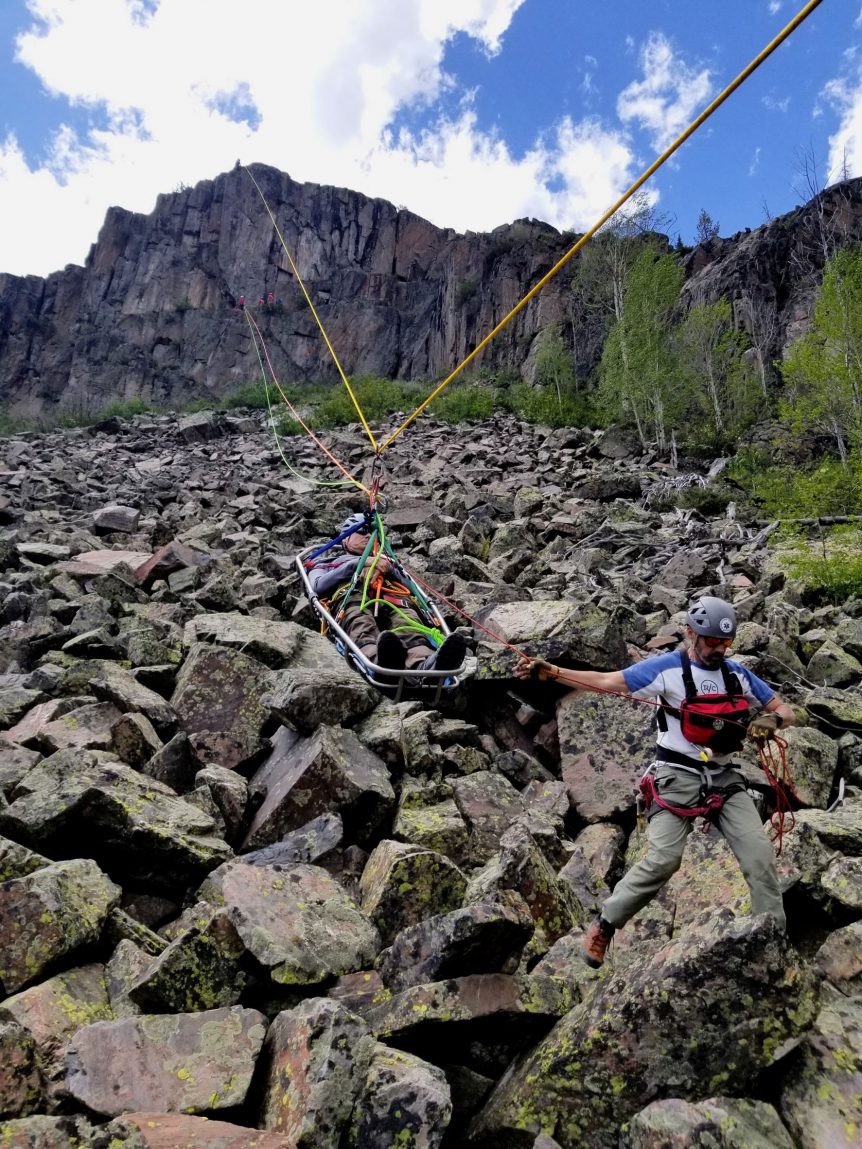 We had some great entries this year and it was tough to pick the winners! Here are the first, second and third place winners in each category.

Third place – “Down in the Smuggler” by David Hunsicker of Front Range Mine Rescue:

Second place – By Alison Sheets of Rocky Mountain Rescue Group. This panorama provides a bird’s eye view of Alpine Rescue Team providing a low angle litter evacuation to a patient during their recent MRA reaccreditation. They passed with flying colors:

First place – By Harry Sandler of Routt County SAR. Routt County Search and Rescue volunteers use a guiding line to safely lower a simulated patient over a talus field during a ropes training in North Routt:

Third place – By Trevin Montano of Boulder Emergency Squad. Search and rescue teams celebrated after successfully finding the lost hiker. 54 people from 12 different agencies responded to assist in locating a missing hiker that was found 24 hours from the last seen point:

Second place – By Doug Klingemann of Routt County SAR. This photo comes from a rescue of a hunter who was injured in a horse accident in north Routt County late one evening. Routt County SAR, North Routt Fire and Classic Air Medical all responded. The Classic Air Medical nurse and paramedic were able to make contact late at night and stayed with the patient through the night while RCSAR and NRF personnel worked to access the patient’s location. RCSAR and NRF personnel arrived on scene in the early morning hours to help move the patient to a suitable landing zone. This photo takes place as all three agencies work together to load the patient in the helicopter as the sun rises. RCSAR works with NRF & Classic Air Medical extensively and appreciates an excellent working relationship:

First place – By Erik Rasmussen of Chaffee County SAR North. Taken during a rescue performed on August 14th, 2022 on the Ellingswood traverse in the La Plata Range. It depicts helicopter 28HJ and Canon Helitack crew rescuing two cliffed-out hikers from around 12,800′ while performing a Hover Step operation:

Third place – By Lindsay Lesch of Summit County Rescue Group. This mission was a 7+ mile skin in through freshly fallen snow to a backcountry hut, Janet’s Cabin. The skin out was conducted completely in the dark. Throughout the course of this mission, a dozen people rotated through pulling the Akia in with gear and out with a patient who had a neck injury. The two members in this particular photograph exemplify how our team brings new members into the fold by partnering with them on missions. In the lead is a member with 5+ years on the team and vast experience on winter missions paired with a new member on her second mission with the team. All five of the probationary members who went into the field that night had multiple opportunities to rotate through pulling the sled in or out with an experienced team member:

Second place – By Emilie Jue of Rocky Mountain Rescue Group. Over-snow evacuation of a skier injured in the backcountry in Indian Peaks with a knee injury in January, 2021:

Best Photo by a Non-SAR Member

First place – By Brian Crowley, Canon Helitack captain. Rescue performed on August 14th, 2022 on the Ellingswood traverse in the La Plata Range. Chaffee County SAR North team members being dropped back off after the successful mission at their home base in Buena Vista: