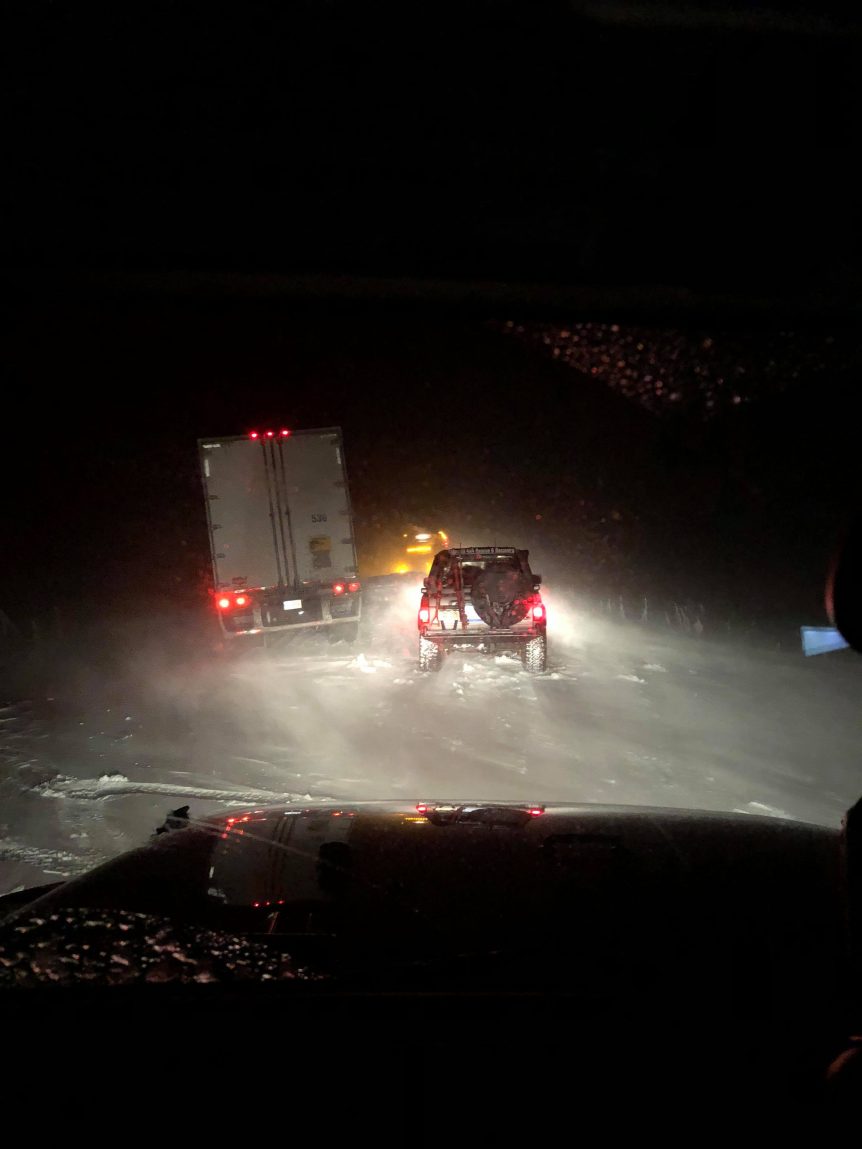 In February of 2022, CSAR announced its first-ever blog contest, open to both backcountry search and rescue members and non-members. The contest was judged by Matt Lanning of Chaffee County SAR South, Ben Wilson of Rocky Mountain Rescue Group, and Lisa Sparhawk of CSAR. Over the coming weeks we will be posting the winning articles, starting with the following, which won an honorable mention in the most memorable mission category.

My favorite mission is not such because of the success, but because it was a milestone.  In April of 2018, Colorado 4×4 Rescue and Recovery was not well known.  We were still learning and earning our way into the rescue community.  Training classes had paid off and professionalism was a priority, but we were still being personally monitored by sheriffs when deploying into their counties.  We were young, and the required trust was still rightfully being earned.  The need for our services and skills were also still publicly doubted by some in the off-road community.

I was on a recruiting appearance for the organization when my teammate messaged that we were being paged out.  As I had been presenting to a 4×4 club and answering questions, the state’s first bomb cyclone had been wreaking havoc in Northeast Colorado.  We were informally put on stand-by.

As we left the meeting, I got on the phone with our president, who briefed me on the developing situation.  High winds, snow and closed interstates made trouble on the surface roads and for people who had not taken warnings seriously.  Vehicles were blown off the road and getting snowed over.  There was no efficient way to reach them, spread out over three counties engulfed in a cyclone.  It wasn’t our usual mission.  We wouldn’t be recovering any vehicles, but instead, we were being considered for vehicle-based search and rescue operations.

I was told to get home, put the full top on my Jeep, and replace our advanced recovery gear with spare food, water and cold weather gear.  Meanwhile, a discussion was taking place among the people burdened with decisions in which lives hang in the balance.  We were a topic in that discussion.  Our organization was being assessed.

In the early evening, the growing number of motorists in distress in the region dictated the decision.   Logan county activated us.  Although it was not the first time we deployed for a life-or-death situation, we had never deployed at such scale or in such conditions.  It was intimidating and thrilling.

Eleven rigs drove to Sterling up the partially closed I-76, to the regional ESF-9 operations center.  This was our first time being briefed for a multi-agency rescue mission.  We took notes and made assessments regarding how best to deploy.  We wanted to do our best, but we also knew people were waiting for help.

We were briefed on the missions needed and given initial locations for our five teams, and we headed into the storm.  Fifty mile-per-hour winds and snow made for some of the most dangerous conditions we had encountered, although the terrain was not nearly as remote as we had become accustomed to.  We had been taught to work from the strengths of our training and our rigs.  We exploited our training in communications, leadership, and team dynamics, always knowing we also had survival skills and Wilderness First Aid training to limit our anxiety.

After clearing initial targets, Yuma and Washington counties also activated us for the same work in their counties, locating snowed-over cars blown off the road and transporting the occupants to shelter.  Along the way, we cleared other vehicles that had been abandoned and trucks that were not going to be abandoned, and evacuated occupied snowed-in vehicles we encountered along the way.  One rig navigated in each two-vehicle team while the other managed comms and searched the roadsides for our targets.

The most memorable part of the mission was digging out cars that were merely snow lumps on the side of the road and finding scared but relieved occupants.  In blowing snow and often with only the light from our rigs, we moved adults, children and pets into our vehicles.

Throughout the night our teams were directed to new targets as we cleared others.  Our training and teamwork paid off.  Our mission had been realized and for the first time we had been asked to rise to a state-level emergency.  By the time the sun rose, our mission board was clear.  Colorado 4×4 Rescue and Recovery had done what was asked of us and we were relieved from duty.

Personally, I was exhausted and proud.  As a young organization we were often mocked for how seriously we took our training.  We knew there was a gap in the fabric of public response that we could fill.  Our organization would have higher profile missions in the years to come, but none would have such meaning as those trips between remote snowscapes and shelters.  That night, centered around Akron, Colorado, we came of age as an organization.  I had never been so proud of our work as I was that morning.

It remains my favorite mission because there is no feeling that compares to being asked to trust your safety to another on your team.  That night, we trusted one another and our training, and we succeeded.  I will always have a bond with those men and women, no matter where our futures lead.