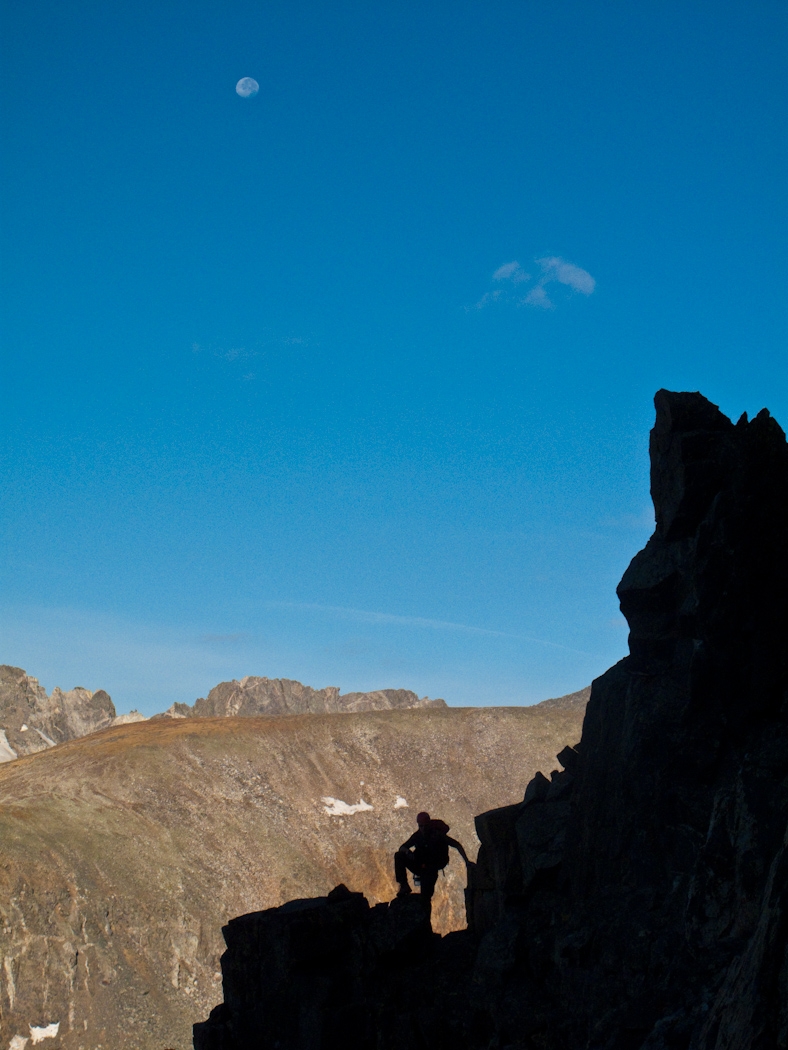 It’s 1:00 a.m. and my butt is cold.  I am beginning to lose the feeling in my toes.  My fingers feel like they are about to fall off, and my nose is running.  There is a cold wind blowing across my face and down my neck.  I am miserable despite the fact that I’m wearing all the extra warm clothing from my pack.  I stand up to start my warm-up procedure, which consists of a series of gyrations, shakes, swinging of the arms and jumping up and down.  When I did this about twenty minutes earlier I caught a pika in the beam of my headlamp, staring at my movements, frozen in fear and amusement.

I look around for my little audience and survey my surroundings.  I determine that I am completely alone in a sea of boulders with a dark horizon of jagged peaks and ridges surrounding me.  A few minutes and crazy gyrations later I am warm and can return my attention to the reason I’m on the side of Quandary Peak on this cold, early September night.  The vertical face of the mountainside rises up in the distance like a black canvas, devoid of detail and depth.  On it, climbing upward like an erect version of the constellation Orion’s Belt, are the pin-sized lights of my fellow teammates.  The lights have not moved an inch in the last couple hours, and I don’t expect to see any real movement anytime soon.  I have been playing the role of spotter since I arrived on scene around 7:30 pm, and progress has been slow and hazardous.  The sound of rocks cracking and rumbling off the mountain, raining terror and destruction, has ceased for the moment.  But there was a time at the beginning of the rescue operation that it was nonstop.  One such boulder, which was later described as the size of a small Volkswagon, broke loose when Charles tried to use it to pull himself up the mountainside.  Despite its immense size the boulder gave way and there was a loud crack heard half a mile away, immediately followed by rescuers shouting, “ROCK!”  The boulder rolled over Charles’ right leg, leaving a nice sized gash.  He walked out a short time later with Katie and I saw his injured leg.  Another Quandary mission and another close call.

I gaze out into the darkness and start counting lights, mentally reviewing who is out there and which light represents each teammate.  I turn off my own headlamp, not only to conserve my battery, but also to let my eyes adjust to the night so I can distinguish the lights better.  Starting at the base of the cliff my teammates are currently assaulting are Shawn and six members of Alpine Rescue Team.  On a ledge above them sits Glen, Anna and Colin on what must be a very narrow and lonely perch.  Going up climbers left and out of sight behind a rock outcropping is Brian.  Brian was one of the original members on scene, having gotten a lift in from Flight For Life.  He also helped decide the route and is currently playing the role of belayer for the final two rescuers above him, Hunter and Jim.  Hunter reached the three stranded hikers first, more then three hours earlier.  He flew in with Brian and was the first to lay eyes on the difficulties and dangers we were about to encounter.  His lead climb up the completely vertical face, on which water was actively flowing, was later described as epic.  Not least because he did it in the dark by headlamp.  Jim followed a short time later, also doing a heroic job to reach the top.

All told, there are fifteen souls scattered across the side of Quandary.  Some are setting anchors, some are waiting to belay, some are standing by with extra equipment, some are providing additional light, and three are patiently waiting to be lowered down to safety.  Which brings up the question, what am I doing out here?

My usefulness has long since diminished.  At the beginning I was busy and involved.  I talked with the victims on the radio, keeping them informed of our progress and what they needed to do to help.  I played traffic control and sent teams in from my location to the base, showing them the best route to stay out of the rockfall.  I used Charles’ binoculars to scan the mountainside for alternative routes up.  I relayed radio traffic back to base.  Finally, I helped guide Hunter the final hundred or so feet to where the stranded party was.  But now the radio was silent, and there was absolutely nothing for me to do but shiver and wait.  I sit down on my cold rock, looking up at the spectacular Milky Way above, and contemplate my answer.  Was I out here for three hikers stranded on a cliff?  Or for the twelve teammates who have purposely ventured into danger to get those three off that cliff?

It is only later that I realize fully how much danger some of my teammates were in.  Brian recalls that he stood cowering on a narrow ledge, clipped into the side of the cliff for three hours as rocks continuously rained on him from above.  His was just one of the stories I l heard from that night that sent chills down my spine.  Which bring me to my answer: There is no way I could be anywhere else than out here supporting my teammates.  They are the reason I am out here and not in my warm bed; the three stranded hikers are merely the cause.  When the pager goes off for any reason, I am not responding because someone is hurt, lost or in danger.  I am responding because my team is responding and they need my support, whatever that might be.  Tonight I am just a glorified spectator, while others are out in front doing the hard work.  Next time might be different though, and I know that there will always be someone staying behind and watching my back.

I turn on my headlamp again, but not to look around.  I want the lights I am watching to know that someone is still here, awaiting their safe return.  I imagine what my light must look like from their perspective; a lone light down below surrounded by a sea of darkness.  And I hope that as they fight to stay warm, my light serves as some sort of motivation.  I hope my light represents to them what their lights represent to me – that we are all out here together, and no matter how long this rescue takes, we will all be walking out together.  For this is the essence of what we do as members of the Summit County Rescue Group.  No matter the reason we find ourselves in the wilderness, whether it be for the lost, the hurt, or the stranded, we respond as a team, we work as a team, and we end the rescue mission together as a team.  And if we happen to save the lives of three people who were stuck on the side of Quandary in the process, then all the better.

Editor’s note: Quandary Peak is a relatively safe and straightforward hike if you stick to the popular East Ridge Trail. People get into trouble on Quandary when they attempt to descend on the west, north or south sides without proper equipment, knowledge and experience. These particular rescue subjects were on the west side, which is technical and can be treacherous.