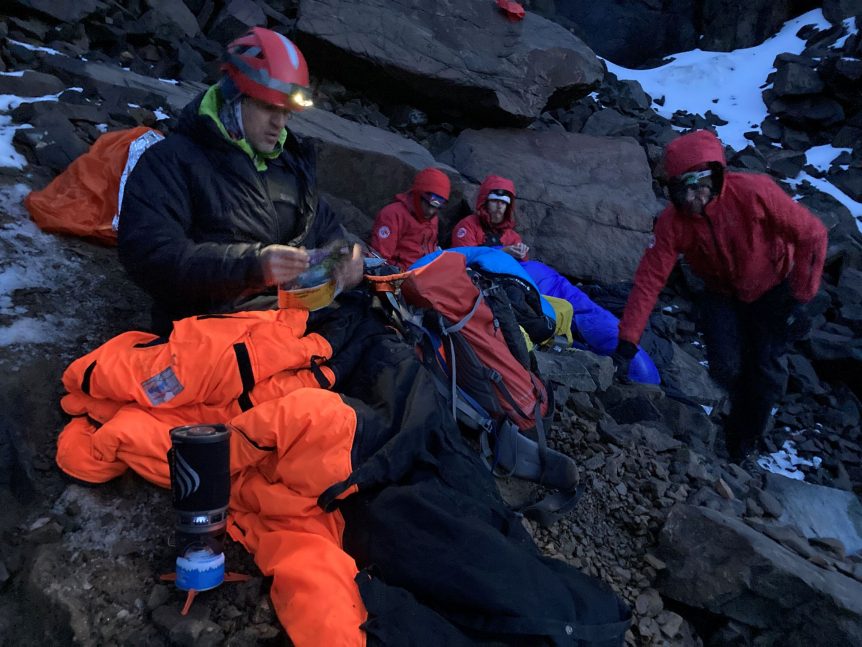 The Colorado Mountain Club and CSAR’s awards committee were pleased to present the Valor Award to Ouray Mountain Rescue Team at this year’s SARCon. Jim Donovan from Silverton Medical Rescue accepted the award on behalf of the neighboring team.

The dramatic 2021 rescue for which the team was recognized involved a two-day, life-and-death conundrum on Mount Sneffels. The incident was notable because of violent weather, post-midnight staging at altitude, the victim’s condition, some unlikely community support, and the assistance of another Colorado rescue team.  Rescuers spent Friday night, July 30, with a 50-year-old Fort Collins man who tumbled 40 feet down steep terrain below a section of tricky climbing at an elevation of 14,020 feet, under the Sneffels summit. A National Guard helicopter hoisted the fallen hiker off the mountain the following morning.

The subject was an experienced mountain hiker and was hiking with a much less experienced partner, whom he was mentoring in hiking 14ers. They summited Sneffels at 11:20 a.m. on Friday. During the descent, the experienced hiker fell past his partner. She descended to him and activated her GPS device: “Confirmed fatality. Send help.” Inexplicably, 25 minutes later, another notice was sent: “Cancel.” Such mixed signals are common realities in the early stages of rescues, however, and Ouray’s team operating procedure dictates to assume the worst and hope for the best. A team was sent up Yankee Boy Basin to figure it out. At the Sneffels trailhead, at 3 p.m., descending hikers confirmed there was a badly injured man on the peak. But rescuers also encountered rapidly deteriorating weather with heavy rain, hail piling up inches deep in places, and heavy, sustained lightning pinning them at their vehicle for two hours. Finally, at 7 p.m., the weather cleared enough for a team to make a sprint ascent of the Lavender Couloir and contact the fallen hiker. The initial assessment of his condition was dire. He had suffered a head injury, a broken leg, and significant hypothermia.

Due to the current and forecasted rain storms and heavy clouds, the National Guard was not able to accept a mission until the next morning, when weather was forecasted to clear. Team 1 was forced to bivouac overnight and additional waves of team members brought medical supplies, warm gear, and food. Meanwhile, team 1 was now engaged in a literal wrestling match to hold the disoriented and combative patient in place on the mountain. Some combination of his head injury and hypothermia made him unable to comprehend his situation and at imminent risk of tumbling down the steep, rock-filled couloir. The three members of team 1 had their hands full.

To further complicate an already complicated mission, the torrential downpour had washed out the road and blocked the way. The County Road crews were already managing a mudslide blocking a different jeep road to free some trapped Jeepers, and the washed-out road made shuttling additional people and supplies to the trailhead a very slow process, as only a small side-by-side vehicle could negotiate the washout. Community member and hard rock miner Bumper Williams, hearing the radio traffic, used heavy equipment from the nearby mine to clear the road and restore access to the trailhead.

Throughout the night, team members worked to ferry equipment, supplies, and food from the trailhead to the accident site. Thankfully, as the patient warmed up he slowly became less combative and finally even slept.

The next morning at 7:15, a Colorado National Guard helicopter carrying hoist rescue technicians from Mountain Rescue Aspen arrived above the bivouac scene. The hiker, whose condition had improved throughout the night, was on his way 45 minutes later to a medical helicopter waiting for him in town. The team, tired from an all-night wrestling match of a mission, and further hampered by some of the worst coffee known to man, packed up the remaining gear and made the steep hike back to the trailhead, a ride to town, and their day jobs. All told, seventeen team members plus those from the National Guard and Mountain Rescue Aspen participated in the 22-hour operation.

Ouray Mountain Rescue Team captain Ruth Stewart comments, “I can ask for no better people than those of the Ouray Mountain Rescue Team. They had the courage to brave the weather, the dark, a mountain covered in loose and falling rock, and an all-night vigil with an injured hiker. They are my heroes and fully deserving of any and all recognition for their service to their fellow humans.”

Colorado Mountain Club executive director Keegan Young adds, “The Colorado Mountain Club and our constituency of thousands across this fine state value our citizens that give their time and expertise to educate the public, coordinate search and rescue missions, and advocate for responsible recreation.  It is our honor and duty to work with CSAR in recognizing their valor annual through the CMC SAR Valor Award.”