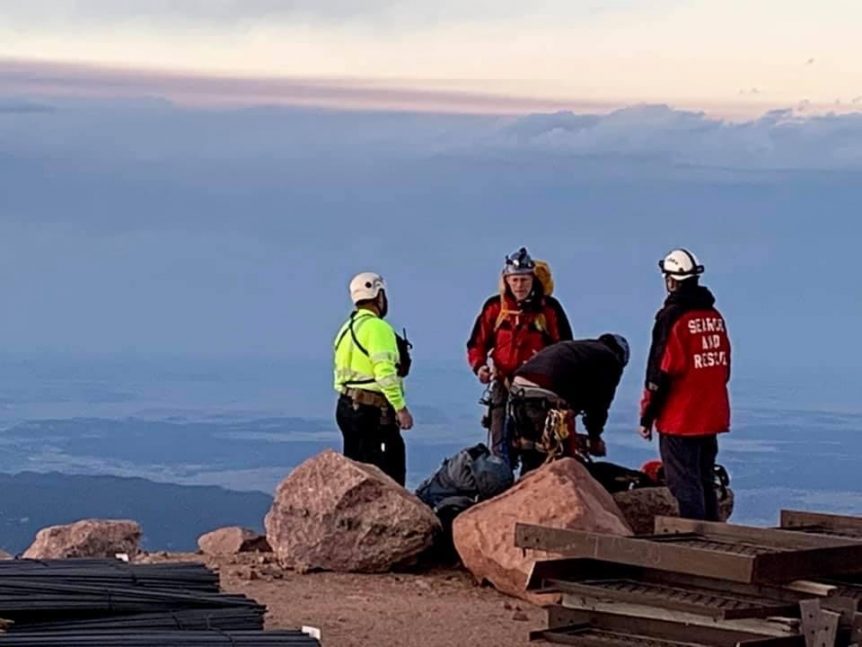 By Heather Davis and Mitch Walma

In February of 2022, CSAR announced its first-ever blog contest, open to both backcountry search and rescue members and non-members. The contest was judged by Matt Lanning of Chaffee County SAR South, Ben Wilson of Rocky Mountain Rescue Group, and Lisa Sparhawk of CSAR. Over the coming weeks we will be posting the winning articles. The following article by Teller County Search and Rescue members won third place in the mission story category and gives a glimpse into what it’s like when a team gets overloaded.

Only once in the history of Teller County Search and Rescue has the team been called to three missions in one day; that day was August 12, 2020.

At 1347, TCSAR was called to the Lovell Gulch Trail by the Northeast Teller County Fire Department and EMS, to assist with an injured mountain biker. The subject was riding with his sons when he flipped over his handlebars, resulting in a possible spinal cord and pelvic injury.  We helped locate the subject and worked to package and transport him to the awaiting ambulance. The TSCAR team was out of the field by 1526.

After retrieving the injured biker, many Teller SAR members returned home, and some broke off to enjoy a ride of their own. At 1600, a mere 30 minutes after finishing the Lovell Gulch mountain biker rescue, the team was called to the summit of Pikes Peak to assist El Paso County SAR in a search for two lost hikers. What had begun as a beautiful, sunny, 80-degree day at 9,000 feet quickly turned into a bitter, 38-degree mission at a treacherous 14,000 feet.

Driving up, most of the team assumed the focus would be on Barr Trail or the Devil’s Playground Trail. We were surprised to learn, however, that the lost hikers had descended the Y Couloir and were now stranded. One hiker was injured after having fallen down a 1500 vertical rock face within the couloir. The second was exhausted and stranded on the cliff above.

The female had fallen and broken her ankle, and her husband, who had followed her down the Y Couloir, was unable to continue up or down. The female subject’s Apple watch had alerted 911 to her fall.

Assistance was divided into upper and lower teams. From the summit, Flight For Life transported two members of TCSAR to the Bottomless Pit beneath the Y Couloir. Conditions were such that FFL had to desist flight, so a larger group of combined El Paso and TCSAR members began the climb down the northeast ridge. A third team, consisting of three TCSAR members, descended the Y Couloir (firehose branch) to meet an El Paso SAR member who had worked his way down through technical terrain to reach the male subject.

After the northeast ridge team had climbed down the ridge carrying a litter and ropes, they ascended up the Y Couloir to the female subject using high and medium angle techniques. The haul out took all night. The team used leapfrogging rope and anchor systems and eventually managed to get her to the Bottomless Pit by first light. She was then taken to a local hospital via FFL.

The lower team was exhausted. After confirming the subject’s safety, they trekked to Barr Camp where they were treated to a pancake breakfast. After refueling they hiked to the Pikes Peak Railroad where they were picked up and returned to Colorado Springs by about 1600. This was a 24-hour mission for the lower team.

Meanwhile, the upper team picked their way down the Y Couloir and made verbal contact with the El Paso rescuer and the stranded male subject. The couloir was filled with loose scree, and the rockfall was a genuine concern. The upper team rigged a rope and sent down harnesses to belay the subject through a technical section of rock. Once secured, the subject was assisted up and out; it was slow going.

At one point, the group halted the ascent to give the subject a break and the subject collapsed and fell asleep. It was determined to stop for the night at 13,400 feet. The team would finish the climb in the morning.

The subject was packaged in warm clothes and a sleeping bag and wedged under an overhang to protect him from rock fall. The construction of the Pikes Peak Summit House was in full swing at this time and debris like an insulating blanket for curing concrete had fallen down the couloirs. The three rescuing TSCAR members pulled the concrete blanket to a ledge and bundled/spooned for a few hours of sleep.

In the morning, a 600-foot rope was lowered from the summit with a pair of boots for the subject, whose shoes had fallen apart the previous day. The team put a harness back on the subject and used ascenders to assist him up the final 600 feet of the couloir. The upper team and male subject finished the climb out by 1100.

The upper team handed off the subject to EMS, packaged up gear, and began the drive down the peak. They returned to base by approximately 1430 the next day.

While the Y Couloir mission was ongoing, the unit received its third and unprecedented callout at 2220. A hiker was missing on the Crags Trail somewhere between the trailhead and Devil’s Playground.  The subject was an older gentleman who hiked the trail often. He somehow got disoriented as darkness fell, and he called his wife to say he would wait until dawn to hike out.  He was not prepared with extra clothes or water and had no emergency shelter. Members who were not deployed on the Pikes Peak mission were routed to this mission.  A team of six was sent to the field to cover the three trails in the Crags area. The subject was found safe, and given food and water and another layer of clothing to keep warm. He hiked out with the team, was evaluated, and drove home. The team was out of the field by 0130.

It was an exhausting day of rescue working with multiple agencies: Northeast Teller Fire, El Paso Search and Rescue, Flight For Life, Pikes Peak Highway, and Teller County Sheriff’s Office.  Thankfully, no team members were injured on any of the rescues, and the entire TSCAR team came away with great stories to tell.