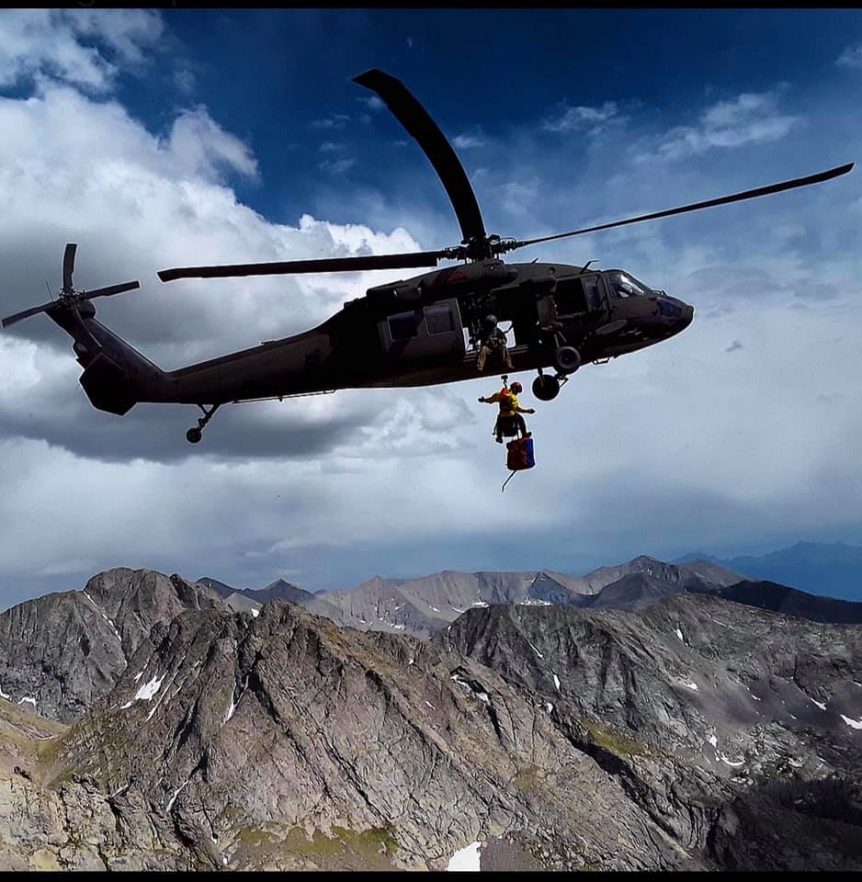 The 911 call came in as a distress call from a hiker who had been hit by rockfall and had a badly broken hand. The local SAR team’s incident coordinator put in a request for a helicopter from the Colorado Army National Guard due to the remote location of the patient and the time it would take to evacuate her on foot. But when the helicopter crew reached her, they described the injury as a scrape on the woman’s hand. SAR communications are often hampered by poor or no cell phone reception, static-filled radio transmissions, and the inevitable mistranslation that happens when a message is passed repeatedly from one person to another.

We are fortunate to have the Colorado Army National Guard (COARNG) as an air support resource. The COARNG can provide helicopter support for search, evacuation and rescuer insertion not only by landing the helicopter, but also by using a hoist. One of CSAR’s many functions is to coordinate requests for COARNG’s services for sheriffs and SAR teams.

When the terrain is so rugged that there is no viable landing zone, that’s where hoisting comes into play with the Colorado Hoist Rescue Team (CHRT). This team is a unique, collaborative alliance of the COARNG and specially trained members from four mountain rescue teams – Mountain Rescue Aspen, Vail Mountain Rescue, Alpine Rescue Team, and Rocky Mountain Rescue Group. The COARNG flight crew picks up a pair of rescue technicians from one of the four teams to participate in the hoist operation, whether it be hoisting an injured subject, inserting a rescuer, or both.

There is a multi-step process for ordering a hoist. Local incident coordinators and/or county sheriffs must first verify that no available civilian air resources are able to do the job. They, along with CSAR, then must do a risk assessment to determine if a hoist is appropriate. Requests are routed first through CSAR, then to the Air Force Rescue Coordination Center (AFRCC) at Tyndall Air Force Base in Florida, then to the Colorado National Guard Joint Operations Center, then finally to COARNG Aviation for launch. Aircraft come out of either the Colorado Army Aviation Support Facility (AASF) at Buckley Air Force Base in Aurora or the High Altitude Army National Guard Training Site (HAATS) in Eagle. Just the process of ordering the resources takes two to four hours.

The criteria for a COARNG evacuation is that life, limb, or eyesight must be threatened. CHRT members accept the risks these incidents pose, but only when there is truly a need. Luckily for the residents and visitors to Colorado, CSAR helps coordinate many missions each year in which the patient would likely have died or been permanently disabled if a helicopter had not been available.

As an example of inappropriate public expectations, during a late spring mission on one of Colorado’s more challenging fourteeners, several technical rescue team members climbed for eight hours to provide equipment and support to rescue subjects who had become stranded in ice and snow after losing their ice axes and ropes. The subjects had asked via cellphone for a helicopter but had been told that no helo would be available until the next day. When the rescue team members reached them, they declined assistance and said they were tired and would prefer to stay overnight and wait for a hoist the next morning.

Helicopters are a great tool as a last resort in a dire situation, but they are not an Uber. We use all other available resources before asking for these federal assets. We don’t use COARNG at night, and any incident using COARNG resources generally takes at least five hours. A helicopter hoist operation is a specialized, dangerous, expensive process, and for 99% of SAR incidents, it isn’t the best answer. Most incidents require “ground pounders;” teams of rescuers that come in on foot.

Backcountry recreationists who venture into terrain above their skill, experience, and equipment level would be wise to remember that there is likely no quick and easy evacuation available if you end up needing a rescue. If you’re able to make a call for help — a cell signal might not be available — SAR operations take time to organize and mobilize. If it took you hours to get where you are, it will take rescuers just as long. The use of a helicopter in a search and rescue operation should never be an expectation. It is the exception.