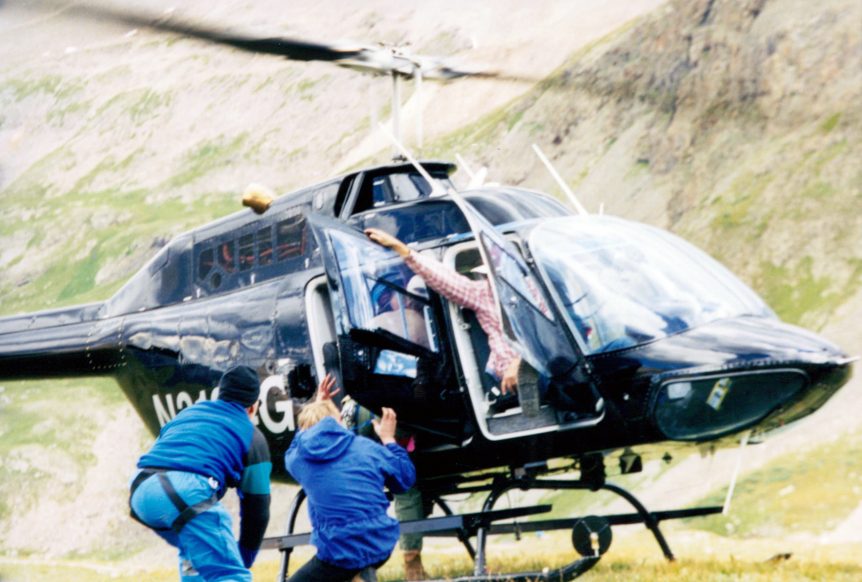 I think this event occurred in 1995 or 96. I was not living in Colorado at the time and had never heard of a fourteener, although I am a native and had spent my childhood in the high country with my dad. I had taken a friend up into Yankee Boy Basin after coming over Imogene Pass. I think this was mid-July, so the wildflowers were extraordinary. It was mid to late morning and the skies were clear, so we decided to hike up to the saddle above the Blue Lakes, on what I now know to be the approach to the Southeast ridge. As we were descending from the saddle and approaching the trail turnoff for the standard Sneffels route, I saw some large trucks coming up the 4×4 road. It looked like a pickup and an EMS truck. A man dressed in black with long hair and a lot of gear, including oxygen bottles, got out of one of the vehicles and ran up to us.

“A woman’s been hurt somewhere up there!” he said, pointing uphill. “We’ve been told she has a head injury and needs oxygen. We’ve got a helicopter coming, not no idea how long it will take.” He said a woman had been hurt in an area he pointed to – somewhere up there. He handed me a radio and asked me to relay communications to the team that had assembled below. Then he took off.

He literally ran up that gully. I would take two steps and gas out, but this guy ran up that gully with many pounds of bulky gear on his back. I never heard anything on the radio, so I guess they had communications with the team. About an hour later I heard the telltale sounds of a chopper. It was a very windy day, and I watched as the chopper made a slow and extremely low approach. Meanwhile, SAR members pulled stuff off the truck, sorted it, assembled various gear and the litter basket, and laid out a cable.

One member began to explain things. “There are no hoist choppers available, so we’ll have to drop the basket on a long cable to the rescue team at the accident site,” he said. “We’ll stabilize the injured person in the litter, the pilot will drop the cable back into the gully, and then we’ll pull her out with the cable and litter only. The gully is dangerous and has a lot of loose rocks and steep walls; it’s very unstable. And the winds at the peak are more than 40 mph; no telling what it’s like 500 feet above, where the helicopter will be exposed. Unfortunately this chopper has no hoist, so we’ll be using a longline to transport the injured party. Hoists are much better, and helicopters that have them also have another person onboard to operate the hoist, act as a spotter etc. In this case, positioning the basket, at altitude, in wind, into a gully, will depend entirely on the skill of the pilot and the rescuers on the ground.”

I watched as the team conferred with the pilot and he took off. It was clear how bad the wind was. The basket at the end of the cable spun and swung wildly as he ascended above the gully. I saw the chopper rise above the ridge, position itself directly over the gully, and descend to drop the basket. The skill that pilot displayed, gauging the wind, cable length and the proximity of the ridgeline, was breathtaking. He was clearly taking his life in his hands. He came back down and landed, and everyone waited. About an hour later he took off again and made his approach. He dropped the cable into the gully behind a pillar so I could not see them hook up the basket. When the basket was attached, the chopper shot straight up at great speed, evidently to get the cable and the basket clear of the walls of the gully. Once at altitude, the basket began spinning and blowing around wildly. It was spinning so out of control I was afraid it would twist right off the cable. There was no litter attendant attached to this cable. The patient was alone, attached to the helicopter by a thin cable, spinning in high winds at a blinding rate, hundreds of feet in the air.

Once the pilot was able to get below the ridgeline, he descended quickly to the landing area. It was a major task to slow the basket down so no one got killed. He landed the basket and backed the helicopter down until the entire cable and basket mechanism was on the ground. The team attended to the woman in the basket, and she was taken down the mountain in a huge rescue truck. I do not know the nature of her injuries nor any other details.

I do know that these men and women were highly skilled, in incredible shape, had an intense sense of urgency and a commitment to getting this person off the mountain as quickly as possible. The call for help had apparently gone out before my arrival, and everything I witnessed happened starting at about 11am They were gone by 4pm.

I have never forgotten those rescue people. I have a few 14ers under my belt now and I have a great respect for my safety and the safety of others. I do not want to be in a basket, spinning wildly out of control, hundreds of feet in the air.

At the time, I explained to my friend that people came out here to the mountains all the time and got into trouble because they just don’t understand the dangers of the high mountains. Dad taught me well, but I had never climbed any mountain of significance and had no idea I was in the shadow of Mount Sneffels. I had been up to Yankee Boy many times as a kid. It was my dad’s favorite place on earth. Now that I’ve gotten just a few 14ers under my belt, read Gerry Roach’s Colorado Fourteeners and many others, taken courses at CMC, obsessively combed over reports, photos, and trail conditions on 14ers.com, and read 14ers disasters, I understand a l little more about what may have happened. I would guess the hiker had started well before dawn and quite possibly summited and was descending. She probably either fell or was struck by rockfall in the gully, which is known for being dangerous. Somehow, someone was able to get a call in to SAR. I know now that it takes hours to stage a SAR effort, to gather teams and equipment. The initial call could have gotten to SAR the night before, or early that morning. I do not believe the hiker spent the night on the mountain, but I am sure she spent many agonizing hours waiting.

This scenario is far more powerful to me now that I have been up there on Sneffels. The risk the hiker took was calculated to some degree, yet something happened. Something can always happen, no matter how prepared you are. The rescue team was so focused, fast, precise, and dedicated. I have an appreciation for the risks of climbing on unstable terrain above treeline, and also for the danger and difficulty of an alpine rescue.

I sent copies of these photos to Ouray Mountain Rescue and received a SAR ball cap in return.