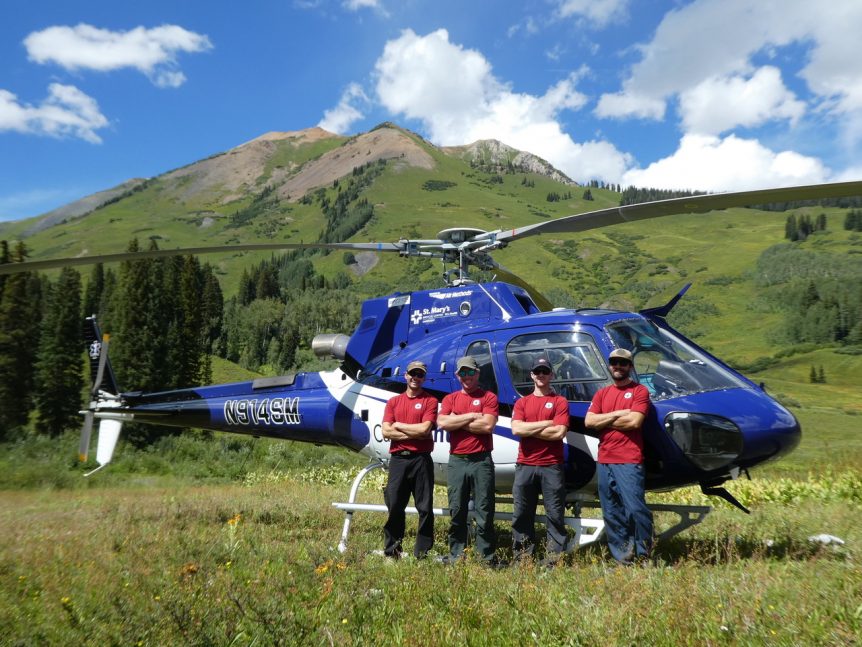 In February of 2022, CSAR announced its first-ever blog contest, open to both backcountry search and rescue members and non-members. The contest was judged by Matt Lanning of Chaffee County SAR South, Ben Wilson of Rocky Mountain Rescue Group, and Lisa Sparhawk of CSAR. The following story by Randy Felix, CSAR state coordinator and member of Crested Butte Mountain Rescue, won second place in the memorable mission story category, but it might also have been entered in the member technical education category for its detailed description of the use of the San Juan Pickoff technique.

It was a beautiful Sunday afternoon in the Black Canyon National Park, and I was at my monthly Black Canyon Rescue Team training.  Usually, our training consists of some sort of large team high angle scenario.  Operating in an environment with the steepest, narrowest gorge in the United States and cliff faces over 2000 feet tall, the Black Canyon National Park Service SAR team must stay on top of high angle skills and techniques.  This day, training was switched up and we were practicing a small team high angle maneuver called the “San Juan Pickoff.”  This high angle technique can be accomplished with only a few rescuers.  It is a way to lower a stuck or injured party with minimal equipment and resources, useful in remote settings where climbing to a victim may be necessary or where access by a large team is not possible.  The training was informative and worthwhile and I could see where it would be useful in the mountains, but I wondered when it would ever come into play in an actual backcountry SAR mission in my area.

At the end of the training day, it was time to drive back to Crested Butte.  Leaving the park, I stopped at the “cell phone spot,” the one area that gets service in a sea of sage and backroads. This is the place to check messages and come back to reality after being in one of the most beautiful places in Colorado.  Two Black Canyon National Park climbing rangers, Tom and Ryan, were also stopped at the cell phone spot when our Active911 emergency dispatch app went off, indicating a backcountry SAR mission in Crested Butte.  The climbing rangers are also members of Crested Butte Mountain Rescue.  We all huddled around our phones and looked at the notes: two cliffed-out climbers stuck on a ledge about 200 feet up the west face of Snowmass Peak.  I looked at the two climbing rangers and shouted, “San Juan Pickoff!”  We laughed, pondering the idea.

I made the drive back to Crested Butte thinking about the upcoming mission.  Crested Butte Mountain Rescue Team was in contact with the two cliffed-out climbers via a Garmin inReach.  The climbers had been climbing the S Ridge route on Snowmass Mountain when a fast-moving storm came through.  There was lightning, and the climbers said they wanted to get off the ridge quickly, so they started descending the broad west face.  The west face of Snowmass Mountain is a steep, rocky face with multiple prominent gullies.  Only a couple of the gullies make it all the way down to lower angle scree and off the mountain.  The rest of the gullies end in jumbled cliff faces hundreds of feet high; in years past, CBMRT has done two recoveries for climbers who fell from these cliffs while descending the peak.  The stuck climbers said they descended most of the face, got to the cliffs and tried to down climb through the cliff band.  It was raining lightly and one of them slipped and took a small fall to a ledge.  They stated they were uninjured, perched on a small, precarious ledge and unable to climb up or down.

When I arrived back in Crested Butte, I went straight to our team cache and briefed on the situation.  I contacted the climbers through the Garmin device.  I told them we would attempt a rescue in the morning, and they should hang tight and do what they could to stay warm.  It was going to be a long cold night for them.

CBMRT mission coordinators started forming a rescue plan.  Fortunately, the weather looked good for flying the next morning.  The plan was to have myself plus three other climbers fly in, recon, land, climb to the stuck climbers and then lower them to safety. Besides me, the hasty climbing team consisted of the two Black Canyon climbing rangers Tom and Ryan, and Jay, an experienced climber and longtime team member.   Other CBMRT members would drive to Geneva Lake trailhead and start hiking in to provide ground support and be a backup team in case the flight option was a no-go.  The drive and hike were a lengthy trip, so that team was to head out at first light the next morning.  The climbing team would wait for the helicopter.

Shortly after 0800 the next morning, CareFlight 3 from Rifle, Colorado arrived at the Buckhorn airport in Crested Butte.  They had done a recon flight on their way over and spotted the two stuck climbers on the ledge.  Their flyby assured the climbers help was on the way.  Ryan and I were on the first flight. We left Crested Butte and after a short but beautiful flight, we were deep in the Elk mountains of central Colorado.   We flew recon across the west face of Snowmass Mountain, spotting the climbers on a tiny ledge about 200 feet up in the middle of the cliff band.  CareFlight 3 was able to make a landing on a rocky flat spot at around 12,500 feet.  We did a hot unload and waited for CareFlight 3 to return with Tom and Jay.  Once assembled, we started traversing under the west face cliff band.  After about a half hour of traversing, we were able to make voice contact with the stuck climbers.  They said they were uninjured but tired and cold.  We yelled up at them to hold tight and not send any rocks down on us!

We took our casual morning flight to 12,500 feet while our ground team was working their way on foot.  The hike into and above Geneva Lake is beautiful but long when loaded with gear.  The ground team was our plan B.  We always have multiple plans in place to ensure a successful outcome.

Under the cliff, we searched for a place to climb to the stranded climbers.  In the sea of broken slabs and stacked blocks, we found a clean left angling corner that ran for about 150 feet.  The corner was clean with a nice crack for gear; it started off as a low angle slab and grew steeper.  Having two members on our team that are also Black Canyon National Park climbing rangers is a plus. Ryan tied into the sharp end of the rope and started leading up the unclimbed corner.  We were having a great time – a helicopter flight to 12,500 feet on a 14er, followed by putting up a first ascent pitch on some decent rock in a sea of choss (rock unsuitable for climbing).  Ryan led the pitch with no issues, putting up what we called a 5.8 corner pitch.  He reached the ledge where the climbers were and then belayed the three of us up.

We congregated on the ledge and made some small talk.  The stuck climbers were ready to get down.  Once again, I looked at Tom, Ryan and Jay and yelled out loud, “San Juan Pickoff!”  The stuck party gave us inquisitive looks while the four of us laughed.   They did not care how they got down, they just wanted to get the hell off the face of Snowmass Mountain.

The cliff face consisted of giant slabs of rock with big loose blocks stacked on top of each other.  On the back of the ledge, Tom found a nice crack between some blocks to construct two gear anchors with cams, stoppers and pitons.  We had traveled light with only three ropes, one dynamic lead climbing rope and two 9.5mm low stretch ropes.  We were not sure if the ropes would reach the bottom.  We lowered Jay off solo to see if the ropes would reach.  If not, he would have to down climb or climb back up to the ledge and we would figure something else out using an intermediate anchor.  As it turned out, the ropes hit the ground with very little to spare.

There were five of us still up top, crammed on the small ledge.  Knowing that the ropes reached the ground, we decided we would indeed use the San Juan Pickoff technique.  The plan was to lower one SAR member with one of the stuck climbers.  Using the San Juan Pickoff technique, the rescuer is tied into one rope with a long tail bowline knot.  The tail of the bowline is tied into the other person so both are tied securely into the one rope.  The second rope is fixed and tied into the anchor with a single strand hanging down to the ground.  The rope the rescuer and victim are tied into is the primary lowering rope.  The second rope hanging fixed is the backup or conditional belay line.  A BlueWater VT prusik is tied onto the fixed line, attached to the attendant and also connected to the person being rescued with a lanyard.  Both the attendant and subject are on the main lowering line and the belay line.  A rescuer at the anchor lowers the attendant and the subject tethered together, side by side, controlling the VT prusik and sliding it down the belay rope.  In the event of a rope failure, there is a backup.  This slick, small team rescue technique can be accomplished with only one member at the top doing the lowering.

Everyone was safe and on terra firma.  CBMRT’s ground team was still on the march in and making good progress.  CareFlight 3 had found a flat alpine meadow to land in, and the helicopter was waiting for us the entire time.  The pilot said he had a beautiful spot to chill and take in the scenery.  Typically, the helicopter does not wait around, and a return trip is never guaranteed.  We always need to be prepared to hike out.

I offered our new friends a flight out.  They graciously declined, since their camp was down by Snowmass Lake and they wanted to get back there to eat and rest.  I asked them to meet up with our ground team for the hike back.  I radioed our ground team and told them that we wanted to join them, but the helicopter was way up by us, and they were way down the mountain, and the prudent thing for us to do was to take the helicopter ride out! A scenic helicopter flight had us back in Crested Butte by 1400 with still time for a late lunch in town.  Unfortunately, our ground team did not make it back to Crested Butte until almost midnight.

This was a very memorable mission for me because, first and foremost, it had a good outcome.  We got a helicopter flight high up into the alpine on a fourteener and climbed a beautiful pitch of unclimbed technical rock.  We did a high angle rescue with four rescuers using a new technique we had just trained on the day before.  We completed a very technical mission in a short amount of time, and I got to do it not only with my teammates, but with some of my best friends.   Days like that are not easily forgotten.